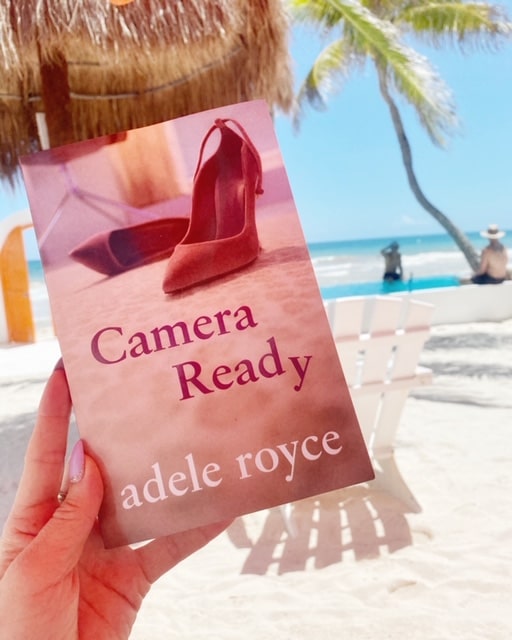 I’ve been trying to find a way to express what it feels like to publish my debut novel. Although I don’t have children, it feels like I gave birth. The first book in my series, Truth, Lies and Love in Advertising is out and available on most channels – electronic, paperback, and hardcover versions. It is called Camera Ready and I read it by the pool over the holiday weekend. It is truly the ultimate beach read, as one of my closest friends said when she sent me the photo that goes with this blog.

How Does it Feel to Read My Own Book?

One word. Surreal! I had read the manuscript so many times since I started writing it in 2018. It has been through numerous edits and revisions. I’ve had beta readers, critique partners and many friends and family who have read it. But sitting down and seeing the words on a page in an actual book made me want to pinch myself to make sure it was real.

One thing I discovered was that I love my novel. I love my characters and I love the story. People have asked what genre it is and who it appeals to. After a lot of research using the Book Industry Standards and Communications (BISAC) guide and reading similarly classified books, I stopped on Women’s Fiction and Workplace Romance. After reading a few of those books, I realized Camera Ready is similar to Sally Thorne’s The Hating Game with elements of Mad Men and, yes, for all you Sex and the City fans, there are some pleasant similarities. And while the book will appeal to mostly women, I have had some men enjoy it (psst – they don’t like to admit it!).

What’s the Book About?

I always give my elevator pitch: Set in Los Angeles, Camera Ready offers a compelling version of a love triangle at its center. A young advertising executive’s secure world topples over when a dangerous old flame re-enters her life.

But there is so much more to the novel. My protagonist, Jane Mercer, wants the American Dream. To Jane, that means a successful career, a happy home, a husband and maybe children. In short, she wants it all.

Her life at the advertising agency, Warren Mitchell & Partners, is rife with exciting campaign work, a full roster of clients and her work “husband,” Jeffrey Vance, who always has her back. Most of us career women have had a platonic work “husband” at some point – you know, the kind who will go to bat for you and cover you in any situation. You can swap company secrets and trust each other to never squeal.

Warren Mitchell is their slightly aloof but fair and even boss. Warren just wants the job to get done – he doesn’t care for theatrics, and he’s a pragmatic leader. He wants the work environment at Warren Mitchell & Partners to remain fast-paced but drama-free.

At home, Jane’s fiancé Derek Lowell, who is a classical violinist, gives her the love and comfort she needs. He brings her coffee first thing every morning, cooks gourmet dinners for her most nights, and surprises her with a gorgeous diamond engagement ring. Sounds like she’s Camera Ready, doesn’t it?

Jane made a horrific mistake in her past – before getting together with Derek, and she gets slapped in the face with it in Chapter one. Craig Keller, Warren’s number one rival and owner of Keller Whitman Group, sees Jane in a restaurant and sends her a drink. Jane is not exactly pleased to see him.

Let me take a moment to describe Craig. He’s obviously the villain, but there is something so insidious about his particular type of villain. He’s over-the-top, drop dead gorgeous, 6’5″ and has the body of an athlete. He’s wealthy, powerful, immaculately dressed, brilliant and cultured – and suddenly available. So, what’s wrong with him? I hear you ask. Oh, plenty! He’s a shrewd manipulator, a narcissist and the biggest womanizer in the city.

Jane already fell for him once – had an affair with him and paid a high price. She knows better than to invite him back into her life. But something about Jane – some emotional bondage – makes her weak to his suave, sadistic machinations.

The Cast of Characters

While Jane is protagonist in two of my three books, I absolutely loved writing Craig. He is the most fascinating villain. And let’s face it, without a villain, there is no story – the villains are what make a novel interesting. One of my writing friends told me that villains are the most fun to write. But I couldn’t make him two-dimensional. Each of my characters gets a full bio that explains why they are who they are. There are some very specific reasons Craig is the way he is, but we won’t find those out fully until my next novel comes out!

Back to Jane – there are some fun yet edgy characters surrounding Jane, too. Her best friends, Marisa and Kat, are always by her side – giving her advice – oftentimes not the best. Especially Kat, who has taken a sudden interest in younger men. Marisa, who has her own television talk show, is dating a British rock guitarist.

Bobbi, the agency’s media planner becomes Jane’s ally at the newly merged agency. She is a gossipy, heavy smoker who chomps on Nicorette gum all day to keep her cigarette cravings at bay. And then there’s Alonzo, the arrogant, temperamental creative director who, by no coincidence, occupies suite 420.

These crazy characters were all figments of my imagination, but they work together to create a colorful backdrop while Jane negotiates her way through the pitfalls of her career and broken romance.

The saddest aspect about writing a novel is something probably no one thinks about. I get so attached to my characters that, when the novel is finished, it’s tough to say goodbye. That’s honestly why I wrote a sequel and prequel to Camera Ready. So, if you read my book and have as much fun as I did writing it, don’t worry – there’s more to come!

Subscribe to my updates – I promise not to spam you with too many emails, but I would like to keep you informed as to when the next Truth, Lies and Love in Advertising novel is released. For Position Only is on track to be published in December 2020. I am also looking forward to some special events in the next year. Until then, stay safe, healthy and always ready for that closeup!